Melanie Arango is a versatile performer who specializes in commercial and concert dance. She trained under many at Dance Academy of Libertyville and was captain of the Mundelein Varsity Dance Team, where she now works closely with the JV and Varsity teams. Her stage credits include Orange Colored Sky by Kent Boyd and This is Sick by Kevin Maher at Murphy Recital Hall as well as Oh, What a World by Cherice Barton, Aphrodite Rising by John Todd and Passengers by Rebecca Lemme at the Strub Theatre. Melanie has trained extensively at Loyola Marymount University where she earned her BFA in Dance with a minor in Theatre. Melanie was a member of the IB Modern Hip Hop Crew. Now that she has graduated, she will focus on teaching and choreographing while she pursues commercial dance 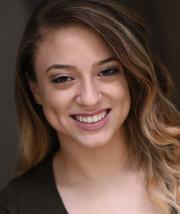