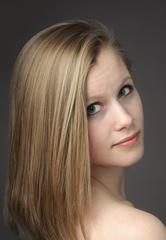 Felicity Lyon Nicholson began her formal dance training at the Fort Wayne Ballet under the direction of Karen Gibbons-Brown. She then went on to receive a BFA in Dance Performance from Butler University, during which time she performed works by Gustavo Ramirez Sansano, Susan McGuire, Derek Reid, Patrick Hinson and many others. Upon graduation Felicity moved to Chicago where she studied on scholarship at Visceral Dance Chicago and at the Lou Conte Dance Center and performed work including Thodos Dance Chicago’s New Dances, Schaumburg Dance Ensemble’s The Nutcracker, and the Moroccan tour of BDE’s Scheherazade. In 2016 Felicity became a member of Project606 Dance and Trifecta Dance Collective, where she was made Rehearsal Director in 2017. After performing Gerald Arpino’s “Light Rain” with the Fort Wayne Ballet in the Fall of 2018, Felicity is delighted to be back performing in Chicago for her first season with Chicago Repertory Ballet.